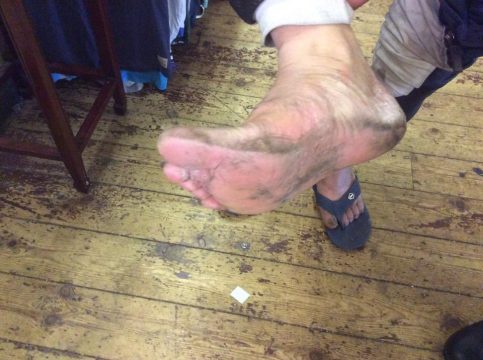 Tony has complex mental health needs and has been in and out of hospital many times. He had been evicted from his own home due to rent arrears and not receiving any welfare benefits.

Before coming to Cornerstone, he had been sleeping rough in between shop doorways, eating from bins and begging for money from passers-by.

He turned up at Cornerstone on a Friday afternoon and we immediately saw that this man needed immediate care, support and assistance. Following his assessment we rang the city council to establish that they had a duty to help Tony, so sent him up to the town hall in a taxi to be allocated temporary accommodation. He arrived back at Cornerstone 2 hours later with a little scrap of paper, with a scribbled note stating ‘accommodation cancelled’.

With no response from the council’s after hour’s number, there was not much left for us to try on a late Friday afternoon. Cornerstone could not turn Tony away. He was totally exhausted from a lack of sleep and had not eaten properly for days. He was in pain with his feet, which were black at soot with dirt and swollen; clearly Tony had not washed for days.

On Monday morning, we sent back to the city council, who said there was a mistake and Tony is entitled to accommodation. We sent him back up in a taxi, however due to his complex mental health, Tony forgot what the building looked like and could not get out of the taxi due to fear of getting lost. The taxi driver had no choice but to bring him back to Cornerstone.

To avoid the same situation, a member of staff assisted back to the town hall where they waited almost 3 hours to be seen. The staff member then assisted Tony to the temporary hotel accommodation, where he still remains.

If not for Cornerstone, Tony would have still been sleeping on the streets of Manchester.