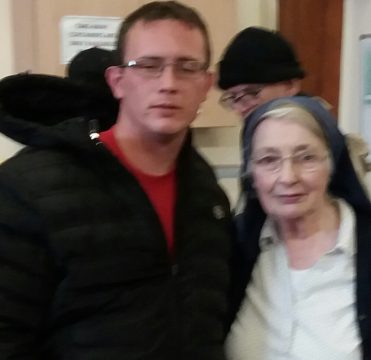 Tom is originally from Bulgaria, he has worked in London for several years. Unfortunately Tom got himself into the wrong circle of friends in London and started using heroin. After leaving the country several times to escape this lifestyle, he found himself returning to UK for work and also returning to heroin.

He eventually referred himself into a supported rehabilitation closed community in Manchester to address his addiction where he stayed for a few months. Following an unplanned early discharge, Tom was left homeless in Manchester with no local connection. With no support from the council and no friendship or support networks in Manchester, Tom ended up sleeping on park benches and in bus shelters for a week before a passer by told him about Cornerstone. He  arrived at Cornerstone carrying the weight of the world on his shoulders and a huge bag of belongings too.

Cornerstone accommodated him until he got financial support for a flight back to Bulgaria where he would be reunited with his family and continue to recover.

It is so sad to see many young people homeless due to falling into addiction. Thankfully we were able to give Tom the support and hope needed to move forward in his life.

We wonder would Tom still be on the street but for coming into Cornerstone. We wish you every happiness Tom.