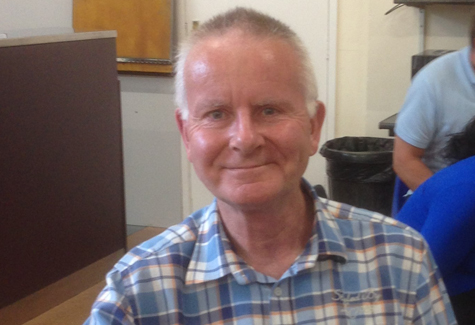 Over 60 people in need of food, a friendly word and some company under the social distancing and stay at home whenever possible advice came to Cornerstone Day Centre on the Bank Holiday Friday. They came to collect a food parcel and some came to thank Howard Bradshaw, Deputy Manager of the Centre on his last day of work before retiring.

Howard has been a constant feature of the Centre for over six years and has been the bridge between the outbound and inbound managers of the Centre.   In his farewell speech, Howard described the companionship and humour of colleagues as part of a community made so by their Christian faith but added that faith was not a pre-requisite for working there but upholding Christian values was.  Encountering faith and values every day of his working life at Cornerstone, Howard described Cornerstone as ‘a special place where I struck gold in the work I was privileged to do and the people I loved working with’.

One beneficiary of Cornerstone, describing Howard said he was,  ‘Absolutely brilliant. I can’t thank ‘Mr Howard’ enough and everyone at Cornerstone enough for their support. I was sleeping rough every night and now I have a home that’s to the staff and the Housing First scheme in Manchester.  I’m going to miss you…you’re one of the good guys!’