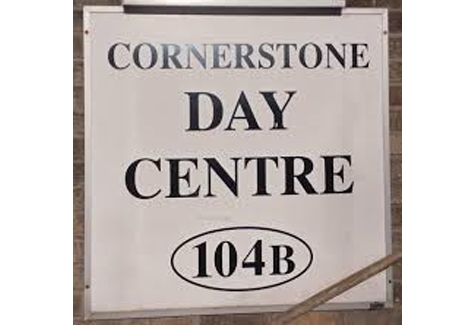 Cornerstone grew from a collaboration of the Diocese of Salford with Canon O’Connor, the Daughters of Charity and several benefactors who, with fairly modest resources, established the provision. Cornerstone received its first beneficiaries in 1991. Five or six years later it had grown at St Augustine’s Parish to two port-a-cabins, a clothing store and a daily footfall reaching beyond one hundred.

Coinciding with the re-assignments of Canon O’Connor and Sister Pauline, local residents raised concerns over numbers of people coming to the port-a-cabins and the location of the project, so together with a growing funding gap, the management committee decided to approach the Diocese (under whose charity number the project operated) for assistance. The project was referred to Catholic Welfare Societies, the adult social welfare and community charity of the Diocese of Salford. Working closely with the Diocese, Catholic Welfare Societies relocated the day centre to its current premises at 104 Denmark Road, which it shared and worked very closely with the Morning Star residential hostel.

Without an appreciable capital investment from the Diocese none of these developments would have been possible, nor would the recruitment of the Franciscan Missionaries of St Joseph (FMSJ) Sisters to fill the gap left by the departure of the Daughters of Charity. With the daily inputs of Catholic Welfare Societies (CWS) came the proper management and new sustainable income streams that sustain the service to homeless people to this day and gave the project stability in times of frequent change.

The role of CWS was again absolutely crucial when the volunteers who had staffed and managed Morning Star found the task beyond them. It was via the Diocese and CWS that the Jericho Society was invited in to undertake this work, which they did for the next fifteen years.

The period between 1999 and 2002 was a very busy and formative time for Cornerstone and Morning Star. Over these three years there was a sizeable capital undertaking, a relocation of two distinct services focussed on rough sleeping and the embedding of a different charism of the FMSJ sisters. There were also achievements in sustainable funding. Funding enabled Cornerstone to progress from ‘a sandwich and a cuppa’, to cooked meals, shower facilities, good-as-new clothing, free phone access; the menu kept growing and the ranks of paid staff and volunteers grew to deliver it.

Alongside all of the above, Catholic Welfare Societies was leading the push towards the establishment of Caritas Diocese of Salford and the transfer to it of all the departments and projects of the Catholic Children’s Rescue Society (CCRS founded 1886), Catholic Welfare Societies (founded 1974) and St Joseph’s Mission to Deaf People (SJMDP founded 1929). Everyone in these services all knew that they were coming under the umbrella of a new charity to bring them together.
The new Caritas charity was established in 2008 and from April 2010 Cornerstone was one of more than 20 projects in the Caritas family of services serving vulnerable children, struggling families, disabled people, the frail-elderly, the isolated, and at Cornerstone, homeless people.

The Caritas objectives have been to build sustainability into the Cornerstone project, by securing longer-term funding, harmonising staff numbers to meet growing demands, introducing additional management posts to deal not only with burgeoning work-loads but also increased complexity.

Cornerstone can look back on three chapters: 1991-98, 1998-2002 and 2002 to date. Each chapter has faced challenges, yet has delivered huge public benefit and the resetting of innumerable broken lives. For the staff, volunteers and service users of Cornerstone, Safe Haven, Morning Star, Doorsteps, The Red Door, the Destitution Project and the Refugee Language Teaching Project, the need for their services is growing. The scandal of homelessness, the indignity of poverty and the need for acceptance and welcome grows apace. A holistic, joined-up approach in which team-working is paramount and which the ideal of ‘One Caritas,’ so recently introduced and adopted, underpins, will continue to be the chosen direction of travel.

Caritas Diocese of Salford is a charity that provides social care services to improve people’s lives. Inspired by the Gospel, Caritas helps people in need and provides opportunities for community service. Caritas enables individuals to enjoy and achieve in their lives and to contribute fully within their communities. The Caritas vision is of a society that confronts and fights poverty, inequality and injustice and in which all people, particularly those experiencing disadvantage or discrimination, are welcomed, valued and supported to reach their full potential.
[Registered Charity No: 1125808]

Cornerstone Day Centre is a service of Caritas Diocese of Salford offering a full range of support services to homeless and vulnerable people, including refugees and asylum seekers, to improve life chances and quality of life. The service offers a unique approach to accompanying people on the long journey to recovery through a human encounter that includes practical support. The service provides hospitality, food and access to support services to rough sleepers and people at risk of becoming homeless. Last year 51,343 visits were made to Cornerstone Day Centre (average of 140 people per day) where beneficiaries received bespoke personal support through a range of services supported by over 100 volunteers.