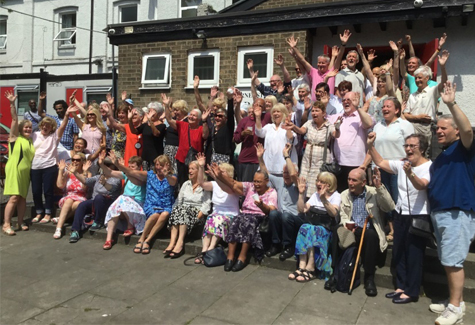 The Cornerstone Volunteers Mass on Saturday 29th June drew in over 100 people, mainly volunteers and supporters to give thanks for the work with homeless and destitute people, refugees and asylum seekers in the heart of Manchester. The opening hymn captured the essence of the service:

We are pilgrims on the journey,

We are travellers on the road.

We are here to help each other,

Walk the mile and bear the load.

Fr Ged Murphy concelebrated the Mass with Fr Tom Mulheran and in his homily paid tribute to Fr Tom for the many years of service to Cornerstone and Caritas. Speaking of Caritas, Fr Ged, now the Episcopal Vicar for Caritas spoke warmly of his experience of the ‘incredible work of Caritas’ that was working to ‘make a real difference and make real the Kingdom of God’.

Supporting the staff and volunteers was the centre manager Angela McIntyre who has developed Cornerstone into a responsive service to help some of the most needy people in Greater Manchester and establish the Safe Haven emergency accommodation known as the ‘pods’ – port-a- cabins that sit on the car park and provide a vital lifeline to destitute people.

Sharing her journey was Marissa who first came as volunteers to Cornerstone from the Netherlands and now and is a worker assisting people to access housing. She was followed by Francesco Leoni ,a tutor for the Refugee Response Education Service based at Cornerstone and supported by the service with classroom space and an evening meal for up to 80 learners per evening.  He spoke eloquently of the educational work that not only improved people’s language skills but gave people hope and friendship to overcome the isolation of being in a new country. Finally, Robert, not his real name, spoke of the change in his life now free from alcohol thanks to the support from Cornerstone.

Completing the sharing was Howard Bradshaw, Deputy Manager who acknowledged and thanked the 173 volunteers that assist Cornerstone’s work saying that none of God’s Army as ever taken for granted and they were the cogs that turned the big wheels of the service and without them the service couldn’t be so good as it was.

The celebration was finished off with a wonderful buffet lunch.